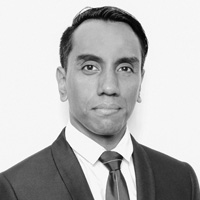 Muid Latif is a digital artist and multi-discipline creative practitioner. He began his career as a multimedia designer, working in web agencies and design companies since 2001 after graduating in Fine Arts, University Technology MARA (UiTM) and was the Multimedia Specialist for the pre-production team of the 2011 International Emmy-nominated ‘Saladin, The 3D Animated Series’. He became an established figure in both digital art and graphic design, promoting the influence of Southeast Asia culture at many local and international exhibitions from Malaysia, Singapore Indonesia, Taiwan, Japan, Australia, Germany and UK. In 2010, he became the first digital artist in Malaysia to perform live digital art with the Malaysian Philharmonic Orchestra. A part of being the Lead Project for Creative Commons Malaysia and the Behance Malaysia Ambassador, Muid recently certified as ‘Creative Industry Expert’ by the Malaysian Ministry of Human Resources under the Department of Skills Development and MSC Malaysia to assist and encourage greater creative standard among Malaysians especially in the education and creative industry.